Animation is a rough gig to get into on a microbudget. It’s always been a people intensive job and “people” are something that most microbudget films are in short supply on.

There are workarounds and hacks to come up with a pseudo-animated feel or going the route of true 3D animation, but a way to create traditional-looking animation without doing it traditionally has been lacking. (This is not to say that companies haven’t tried to create all manner of vector based animation that’s designed to simplify the animation tasks; however, the results—and the number of users who can avail themselves of these products effectively—has been limited.)

Reallusion has been pushing the boundaries of animation for over a decade now and part of what they’ve been able to do is leverage a mindset that’s focused on the lower-budget community, while at the same time giving a place for creative in that community to create new content and profit off of it through their Reallusion Marketplace. (You see this sort of involvement in more traditional 3D environments—like for their own 3D software, iClone—but Reallusion’s users have also been very willing to create content for their 2D offerings, as well.)

CrazyTalk Animator (CTA1) took the notion of facial animation that CrazyTalk had explored through animating photos and line drawings and added in an interactive stage, similar to the one found in Flash. While things were still 2D, now you could animate an entire body, not just the face, and do so in a larger environment.

With CrazyTalk Animator 2 (CTA2) the folks at Reallusion have upped the ante by allowing users to manipulate a 3D skeleton, which in turn generates one of 10 different 2D angles of view. The end result is the ability to use 3D animation tools to move characters around and allow them to interact with spatially oriented props—or other characters—while still appearing to be completely drawn in 2D space.

3DMotion with G2 (Left) and 2D Motion baed G1 Characters (Right)
Inverse Kinematic Skeletons Allow You To Tweak Your Character Realistically.
While it supports morphs (like CrazyTalk 7), CTA prefers actual Sprites that are more like cartoons.
If you’re familiar with After Effects, then you’ll enjoy the new Motion curve options. 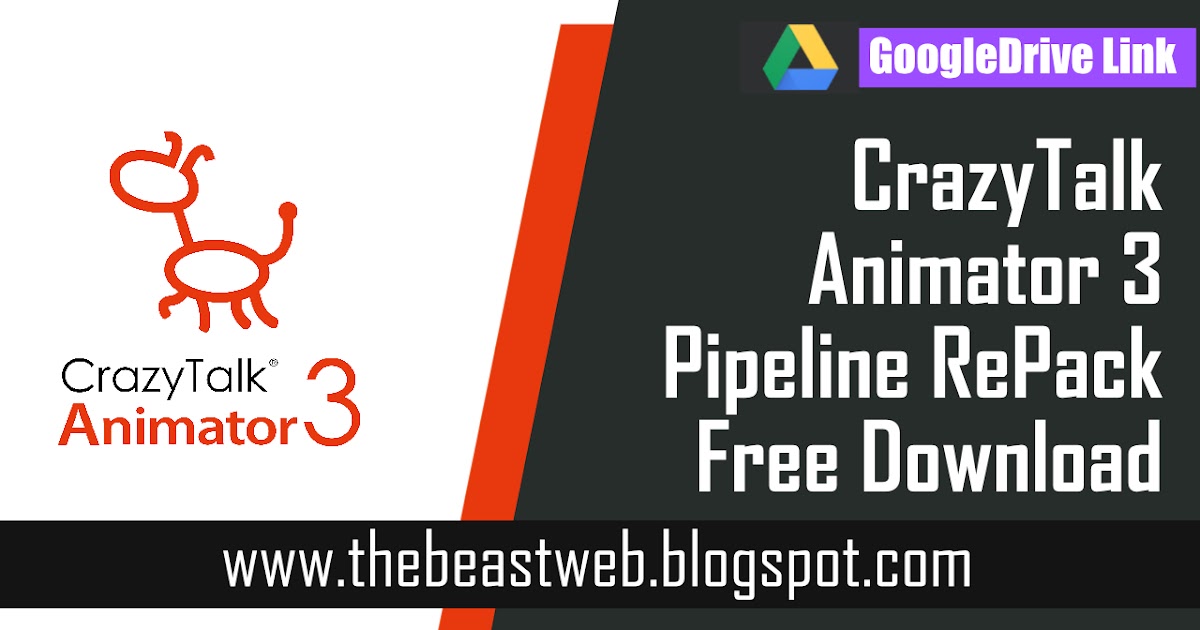 With that said, do be aware that, although the CTA franchise has always been targeted at the CrazyTalk crowd (ie creatives that didn’t have a lot of technical animation ability, but wanted to create innovative animated work), it is a different beast altogether.

Because it has so many more capabilities, and because the needs of a scene in which people can move in and out of a stage with props, other characters, and backgrounds are much more complex, CTA2 has a complexity more similar to Flash.

The downside of this is that new users who are “raster” people (ie “left” brained, creative types who tend to live in Photoshop) will have a little more work ahead of them to learn CrazyTalk Animator–although, some of the 3D layouts in CrazyTalk Animator actually bear a striking resemblance to the 3D viewing system in After Effects.

“Vector” People (ie “right” brained, analytical types who tend to live in Illustrator and Flash) will find it much more natural, on the other hand. (With that said, anyone—on either side of the brain divide—who has already grown familiar and comfortable with programs like Flash will likely find the transition pretty organic, as well.)

If you fall on the non-intuitive side for CTA2, Reallusion has over ten hours of training videos to get you up and running on their YouTube Channel(Seen Below).

Returning users will feel right at home with CrazyTalk Animator 2, as the look and feel is very similar to the last version, adding in new options and features in reflexive ways.

The amazing power of CTA2 comes in how it uses kinematic skeletons to allow you to animate your creations realistically and simply, both in 2D but also, now, in 3D space. (Kinematics revolve around the study of how moving objects move in relation to other objects they are connected to, like how each link of a chain rubs against the others. When kinematic skeletons are used in animation with creatures, you’re able to apply joints that prevent limbs from stretching like rubber or moving in an unrealistic manner.)

After placing an actor within a scene, the most natural starting place is to choose animation presets to get started and then you can interact with the face to add customizations “live.” (For example, you can create a walking animation, but then choose to control where the character’s eyes are looking with your mouse during a live playthrough. The information you input during that playthrough is saved as the animation for the eyes.) You can also interact directly with the skeletons to customize body movements on the go.

Like CrazyTalk, CTA2 is fully capable of doing morphing animation which can be paired with a 2D body (G1). This can create some cool things stylistically, although the vector based animation that is able to be done with the new G2 multi-angle bodies that permit 3D movement is where CTA2 really shines.

For G2 models, CTA2 uses different vector shapes called “sprites” for their animation states; then, rather than morphing into each state, it subtly transitions from each sprite to the next in the line. So if your G2 character speaks, different mouth shapes will be used to represent the mouth at each stage of speaking. (Similarly, eyes opening and closing are different sprites, and each of 10 different angles for each body part are different sprites.) This yields a much more convincing take on 2D animation.

While creating CrazyTalk-style animated content is fairly straight forward to do in CTA2, most people who go to the full Pipeline version—which permits the most customization—will be interested in creating original vector animation and custom G2 characters.

Unfortunately, this is one area where things get more challenging for CTA2, as there’s no way to tweak the actual appearance of your character within CTA2. (You can exchange and resize a handful of body parts, but only two of the default parts will work with any of the default actors, so this doesn’t provide you with much of a range—unless you add in one of the PowerPack expansions. Nor are there any skin color options or “decals” for tattoos, piercings, makeup, or facial hair.)

Currently there are two options for customization:

A) For minor customization, you can import PNGs (or any other popular image file) as sprites to create different parts, but you do need to remember to make different versions from different angles and/or for different movements. This is fine for a goateed mouth or a new nose, but not great for much more than that.

B) For major customization, which could be anything from a new skin color to creating an entirely new character, you’ll need to go into Flash and use a special template, which is included as a separate download solely with the Pipeline version of CTA2.

This leads us to two features I would love to see introduced in CTA3:

– “Elder Scrolls” Style Facial/Skin/Customizations. Being able to first customize gender, race, height, and weight, and then move on to click through a large selection of eyes, noses, mouths, hair styles, facial hair, and clothes would make CTA3 feel much more like an animation program you can get up and running on right out of the gate to create something unique. Without that, it feels like a demo of what you could do if you:

(a) put quite a bit of time into creating a completely original character from scratch (in a completely separate program),
(b) buy a number of expansions to give you more customizations, or
(c) purchase models that look similar to what you want.

– Direct Import from CrazyTalk. Despite the fact that the morph engine works identically in CrazyTalk 7 and CrazyTalk Animator 2, you can’t actually import anything from CT7 into CTA2, other than the script. If direct import is enabled in a future version, then an animation pipeline could be created where one artist uses the simplified tools in CrazyTalk to do the facial modeling, refinement, and animation. They would then export their work to another artist who would import it into CTA and do the body animation. By having each person focus on only one element, output could be sped up tremendously.

(To give you a glimpse of how useful such an import/export system might be, I’ve included the embed of the new episode of the Silas & Ami Show that our friends at DarkestGoth put out. Virtually all of the core animation was done with CrazyTalk Animator 2 assets combined with CrazyTalk 7. Warning: There is uncensored language in this episode, so be advised before watching.)

Overall, CTA2 performed very solidly throughout my testing on my i5 system with 12 gigs of ram and Windows 7 Ultimate. I think that in the entire time I tested it I only had one crash, which is impressive for any animation software.

Related to performance is a reminder for any animators who, like me, choose to work on an offline system. Reallusion does require internet connection for their software to install, so be sure to be connected for this part of the process. (Additionally, a number of packs of content don’t actually install automatically, including all of the G1 models, a number of the G2 backgrounds, and the Flash templates for Pipeline. All of these have to be installed manually or, as in the case with the Flash templates, from the White Papers section of your Reallusion Marketplace account with the system hooked up online.)

This is a great animation software for a lot of projects and definitely deserves a hard look if you want the stylism of 2D animation.

Which version you will need, however, will be based on your proficiency level with Flash. Filmmakers who are comfortable with creating things in Flash and exporting them will most likely want the power and flexibility of the CTA2 Pipeline version.

Filmmakers who are unfamiliar with Flash (or simply don’t have access to it) are probably better advised to get the Pro version—which still allows you to make customizations and even import sprites, but does not allow you to create all new characters—and then spend the extra money on more unique models, props, and scenes by creatives in the Reallusion Marketplace. (Many of these folks are also interested in work-for-hire so you could get original creations crafted that way, as well.)

CrazyTalk Animator 2 is a strong animation package that allows you to be much more creative with the look and style of your animation, coming closer than I’ve ever seen to replicating the traditional hand inked cells of yesteryear.

You would be well advised to at least download the 15 day demo of this software and see if it’s a good fit for your upcoming animation project!

The director of two feature length films and half a dozen short films, Jeremy Hanke founded MicroFilmmaker Magazine to help all no-budget filmmakers make better films. The second edition of his well-received book on low-budget special effects techniques, GreenScreen Made Easy, (which he co-wrote with Michele Yamazaki) is being released by MWP in fall 2016. He's curently working on the sci-fi collaborative community, World of Depleted, and directed the debut action short in this series, Depleted: Day 419 .

Each download we provide is subject to periodical scanning, but we strongly recommend you check the package for viruses on your side before running the installation. The download version of CrazyTalk Animator 2 Pipeline is 2.1. The licence type of the downloaded software is shareware. This license type may impose certain restrictions on functionality or only provide an evaluation period. The contents of the download are original and were not modified in any way.